The Pink Stuff – Harmless or Deadly…

Bismuth Sub-salicylate is a drug used to treat temporary discomforts of the stomach and gastrointestinal tract such as diarrhea, indigestion, heartburn and nausea. Commonly known as pink bismuth, it is the active ingredient in medications such as Pepto-Bismol and Kaopectate.

Bismuth subsalicylate is in a class of medications called antidiarrheal agents. It works by decreasing the flow of fluids and electrolytes into the bowel, reduces inflammation within the intestine, and may kill the organisms that can cause diarrhea.

But, in the gastrointestinal tract, Bismuth Sub-salicylate is converted to salicylic acid (aspirin) and insoluble bismuth 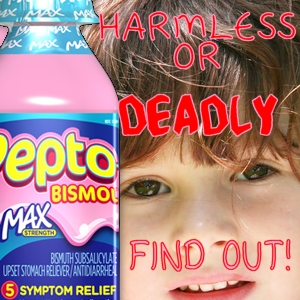 There are adverse effects with this drug, most prominently; Reye’s Syndrome. It can also cause a black tongue and black stools in some users of the drug, when it combines with trace amounts of sulfur in saliva and the colon to form bismuth sulfide. Bismuth sulfide is a highly insoluble black salt, and the discoloration seen is temporary and and supposedly harmless.

Children should not take medication with bismuth subsalicylate because epidemiologic evidence points to an association between the use of salicylate-containing medications during viral infections and the onset of Reye’s Syndrome.

Never give a child under the age of 19 any product with aspirin when suffering from flu symptoms or a viral infection, including products like Pepto-Bismol or Kaopectate!

For the same reason, it is recommended that nursing mothers not use medication containing bismuth subsalicylate like Pepto-Bismol because small amounts of the medication are excreted in breast milk and pose a risk of triggering Reye’s Syndrome to nursing children. 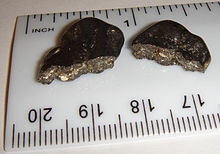 Bismuth subsalicylate is the only active ingredient in an over the counter Drug that can leave a shiny metal oxide slag behind after being completely burnt with a blow torch.

Before you, as an adult, take bismuth subsalicylate:
— tell your doctor or pharmacist if you are allergic to salicylate pain relievers such as aspirin, choline magnesium trisalicylate, choline salicylate (Arthropan), diflunisal (Dolobid), magnesium salicylate (Doan’s, others), and salsalate (Argesic, Disalcid, Salgesic); or any other medication.

— tell your doctor and pharmacist what prescription and nonprescription medications, vitamins, nutritional supplements, and herbal products you are taking or plan to take. Be sure to talk to your doctor or pharmacist about taking bismuth subsalicylate if you take: anticoagulants (‘blood thinners’) such as warfarin (Coumadin); a daily aspirin; or medication for diabetes, arthritis or gout.

— if you are taking tetracycline antibiotics such as demeclocycline (Declomycin), doxycycline (Doryx, Vibramycin), minocycline (Dynacin, Minocin), and tetracycline (Sumycin), take them at least 1 hour before or 3 hours after taking bismuth subsalicylate.

— ask your doctor about taking this medication if you are pregnant or are breast-feeding. 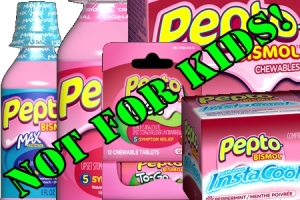 You can get a complete list of medications containing bismuth subsalicylate by clicking this link.

Please think twice, and read the label warnings, before giving a child under the age of 19 any drugs that contain aspirin, salicylates, or bismuth-subsalicylate! You can get a list of ‘other names for aspirin’ here.

Comments Off on Pepto Bismol and Children

Filed under Pepto Bismol and Children